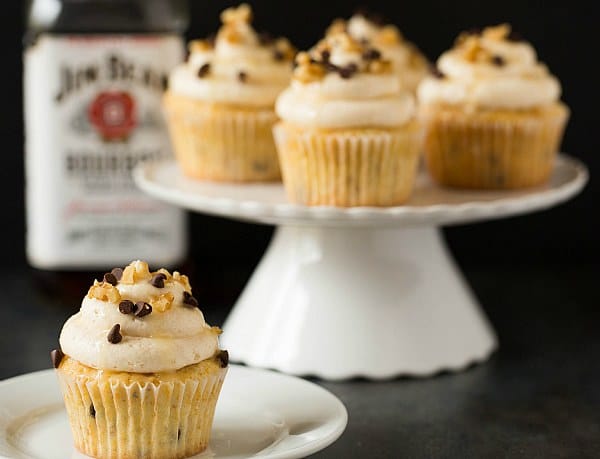 2. In a medium bowl, sift together the flour, baking powder and baking soda. Whisk in the salt, walnuts and chocolate chips; set aside.

3. In a measuring cup, whisk together the buttermilk and bourbon; set aside.

4. Using an electric mixer, cream together the butter and both sugars on medium speed until light and fluffy, about 5 minutes. Scrape down the sides of the bowl, reduce the speed to low and add the eggs, one at a time, beating each until completely incorporated before adding the next, scraping down the bowl between additions.

5. Add the flour mixture in three additions, alternating with the buttermilk mixture in two additions, mixing each step until just barely combined. Stop mixing after the last flour addition when there is still a little flour left in the batter. Finish mixing by hand using a rubber spatula.

6. Fill the cupcake liners about ¾ full and baked until light golden brown and a thin knife inserted into the center comes out clean, 18 to 20 minutes. Allow the cupcakes to cool in the pan for 10 minutes, then remove them to a wire rack to cool completely.

7. Make the Frosting: Using the wire whisk attachment of your stand mixer, whip the butter on medium-high speed for 5 minutes, stopping to scrape the bowl once or twice. Reduce the speed to low and gradually add the powdered sugar. Once all of the powdered sugar is incorporated, add the vanilla and bourbon, mixing until incorporated. Whip at medium-high speed until light and fluffy, about 2 minutes, scraping the bowl as needed.

8. Make the Butter-Bourbon Glaze: Place the butter, sugar and bourbon in a small bowl and microwave for 1 minute, or until the sugar is dissolved. Stir and allow to sit for about 15 minutes so that the glaze thickens slightly.

9. Decorate the Cupcakes: Pipe an even amount of frosting on each of the cupcakes. Drizzle a spoonful of the butter-bourbon glaze over each of the cupcakes and sprinkle with some chopped walnuts and mini chocolate chips. Leftover cupcakes can be stored in an airtight container at room temperature for up to 3 days.